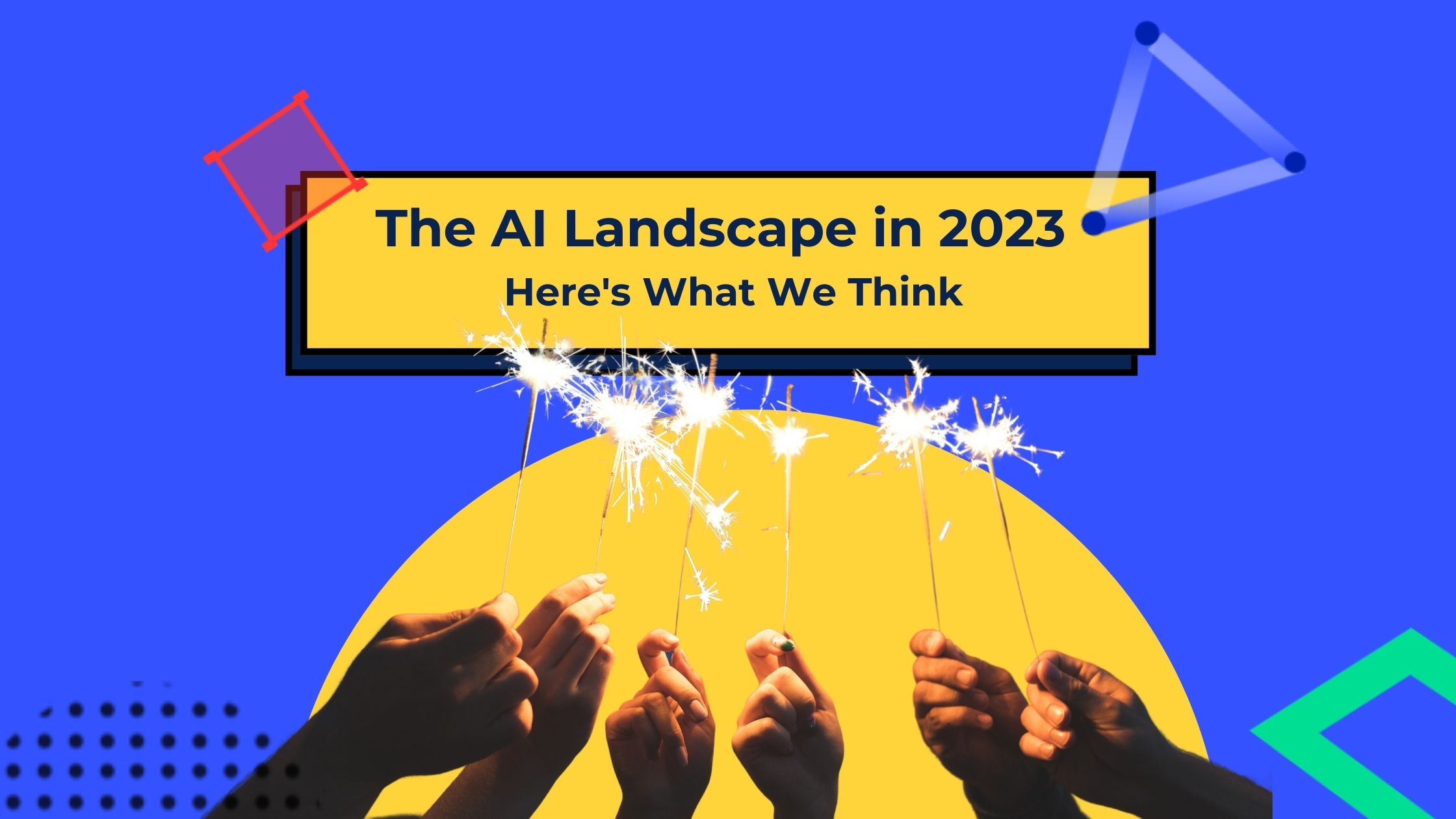 If you take a moment to assess how far AI has come, the progress is nothing short of astounding. Let’s put it in perspective for a moment. In terms of the global AI market, AI is expected to reach $190.61 billion dollars by 2025.  By 2024, there will be 8.4 billion AI-powered digital assistants accounted for which will surpass the total global population. The rate of advancement is pretty fascinating and challenging to keep up with. But we’d like to hear from our management team at Dataloop what they think is store for AI in 2023, and I’m sure many of our readers would as well. So let’s give them the stage.

Dataloop Management Predictions in AI for 2023

I’d like to mention before we start, that if you didn’t catch our 2022 predictions, be sure to check that out too!

Eran Shlomo, Co-founder, and CEO at Dataloop says: 2023 will be a “ride the wave” or “washed out by the wave” moment for all companies, in all verticals across GEOS.  2023 is going to kick off a new phase in the AI markets where AI starts to drive significant change to many professions, roles, and businesses. With this trend the more conservative businesses are going to start using AI with the purpose of making a fundamental impact on their business model and bottom line.

The release of simple to use, yet powerful AI technologies like Dalle and ChatGPT will kickstart a decade-long digital transformation wave which is likely to be bigger than the internet and mobile transformations, with “tornado” like transformation in 2023-2026. Many of the existing players, across verticals will struggle to adapt due to th3e inability to invest the capital or talent in this transformation. 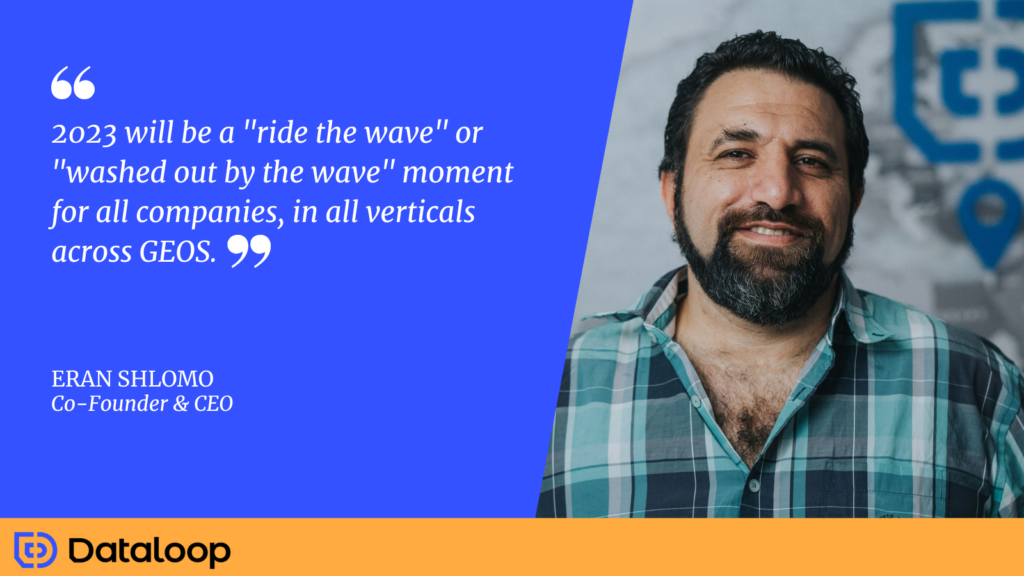 Avi Yashar, Co-founder and Chief Product Officer at Dataloop AI says: 2023 will be the year where unstructured data explodes and more companies working in the AI space will be ready for production. Companies will have to manage and clean billions of unstructured data points in a fast, efficient, and human involved process.

Unstructured data pipelines that involve high scale processes with algorithms/models and humans will be able to answer to such a demand. 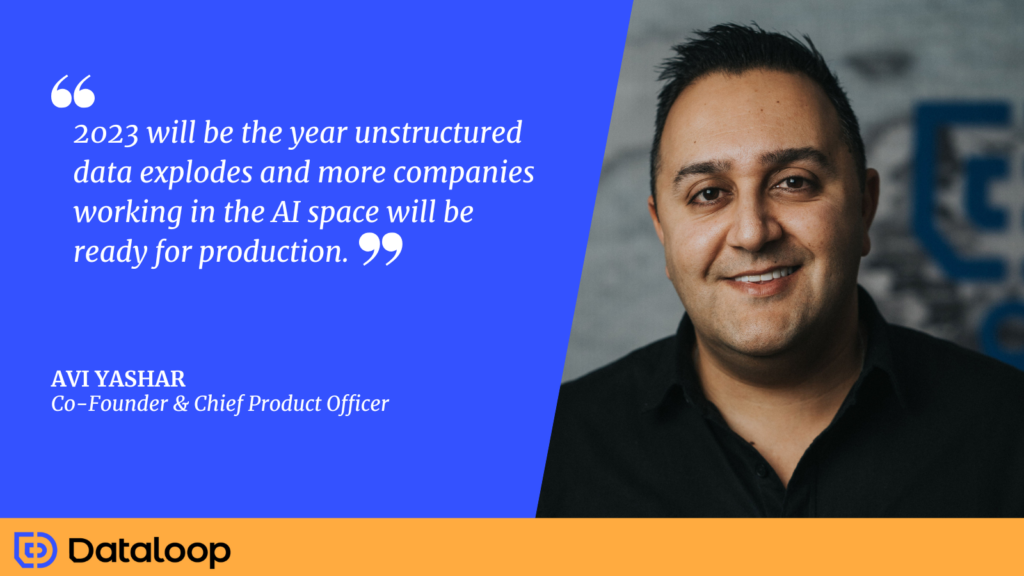 Nir Buschi, Co-founder and Chief Business Officer at Dataloop AI says: 2023 will be an explosive year for generative AI. AI art and content creation use cases will be embedded into creative business applications and products, with us less and less realizing that the visual and textual content around us was generated by AI.

Powering the creation are Prompt Engineer jobs, tools, and ecosystems that will build up quickly this year but will continue to prove the reliance of humans in AI. 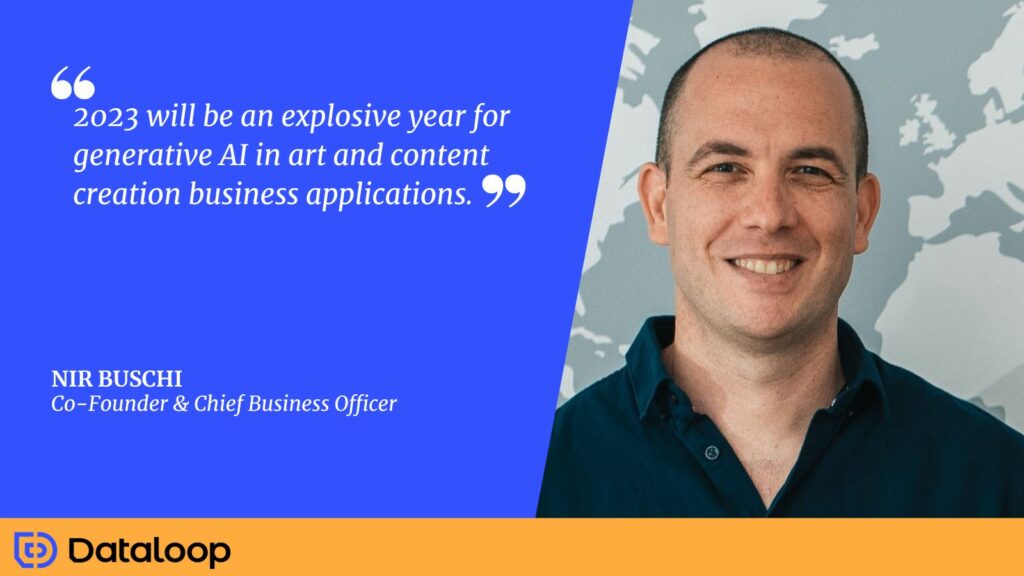 Moran Leshem Bar, Chief Growth Officer at Dataloop AI says: The previous revolution was the digital transformation which was accelerated during 2019-2022. It’s not over, it is just evolving. 2023 will take the AI revolution to its next level. It will be the year when companies understand that AI can assist them to reach their goals. In this new battlefield, each company will need to use AI in order to reach the new growth metrics: 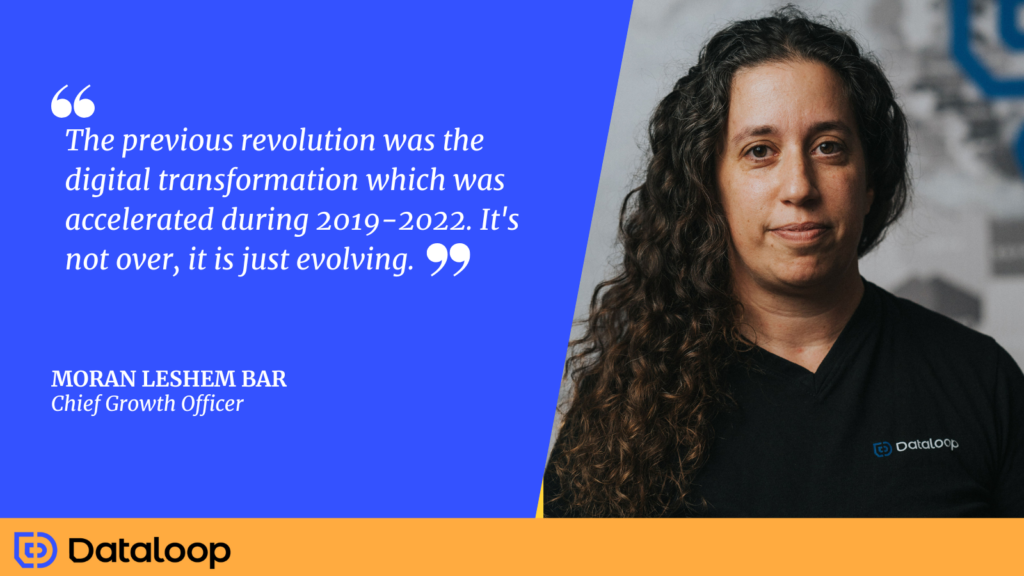 Koby Molcho, VP of Engineering at Dataloop AI says:  In 2023, we’re going to enter the “Data Management Era”, where datasets will grow at a high rate mostly due to the adoption of transformers and production activities.

To actualize this, we will see a new set of tools for visualization and large scale operations, to gain a much better understanding in order to keep up with this transition. 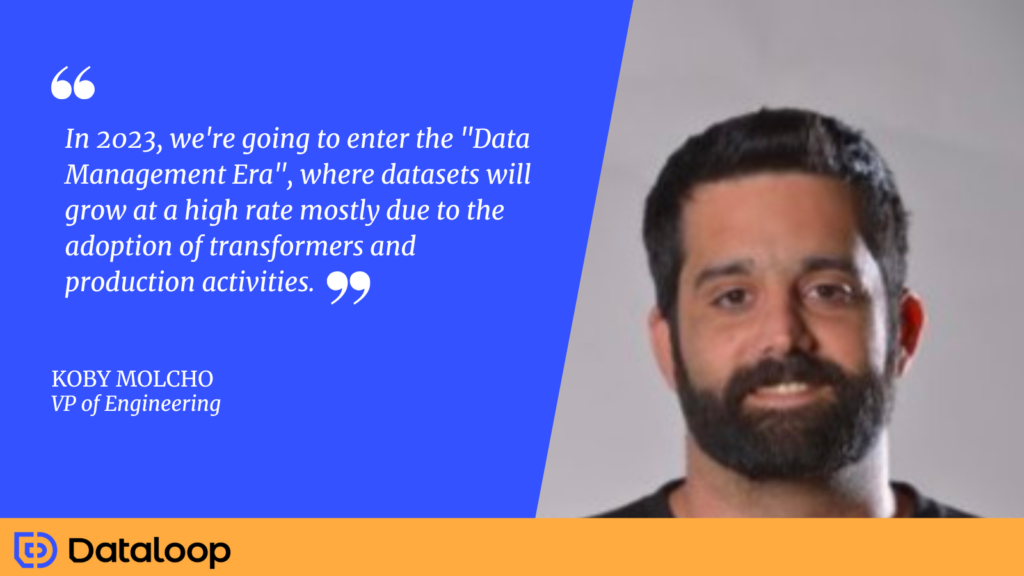 Bill Heffelfinger, Chief Customer Officer at Dataloop AI says: I feel like I’m reliving a period of Developer<>Operations/DBA distortion that existed prior to DevOps becoming mainstream. I see the same pattern repeating with Data Scientists and Data Developers. It feels to me like the Data Science camp is hungry for quality data to train their models – BUT – they can’t, or won’t spend time to create meaningful quality datasets.

Instead, they’re trying to train on very small sample sets hoping for solid, repeatable, and meaningful results from their models.  In the data preparation camp, they feel abandoned by the Data Scientists.  There is often very little specific direction on what quality looks like and maybe even frustration when they are asked to re-work the same data because it was “useless” per the Data Scientists.  This divide needs to be closed.

It might not happen in 2023, but it’ll need to happen soon if AI is to ever become mainstream/the norm, efficient, and effective.  Nice thing is that we’re in a position to point this out and help pull the two groups together.  It might even be a chance for us to form some messages and become thought leaders on the topic. 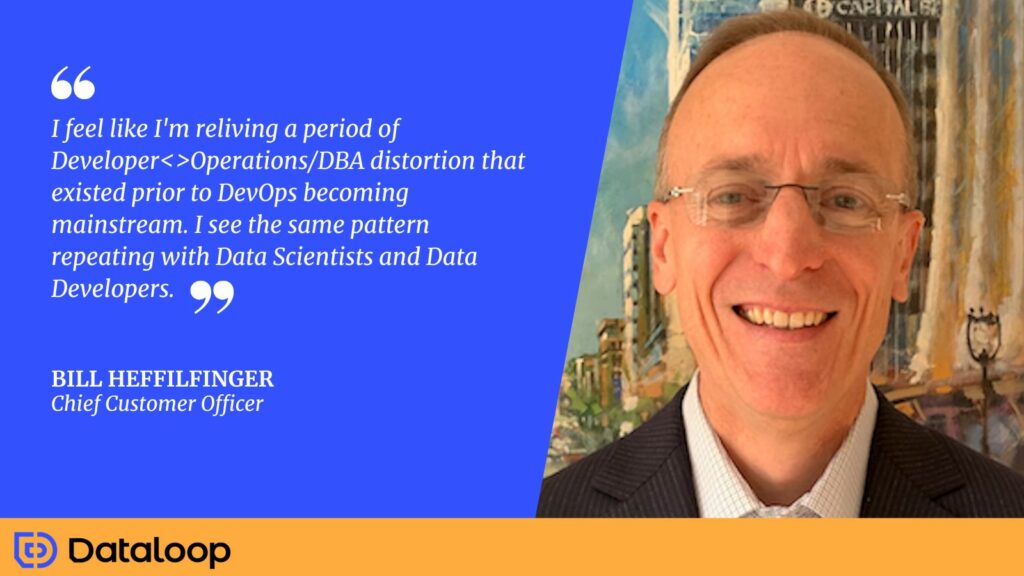 So while I was writing this article, I thought to myself what would ChatGPT answer? So I put it to the test. But I had to make a few adjustments and it was a process. I first decided to ask the question I asked my colleagues– What do you predict for AI in 2023? And I got this answer. 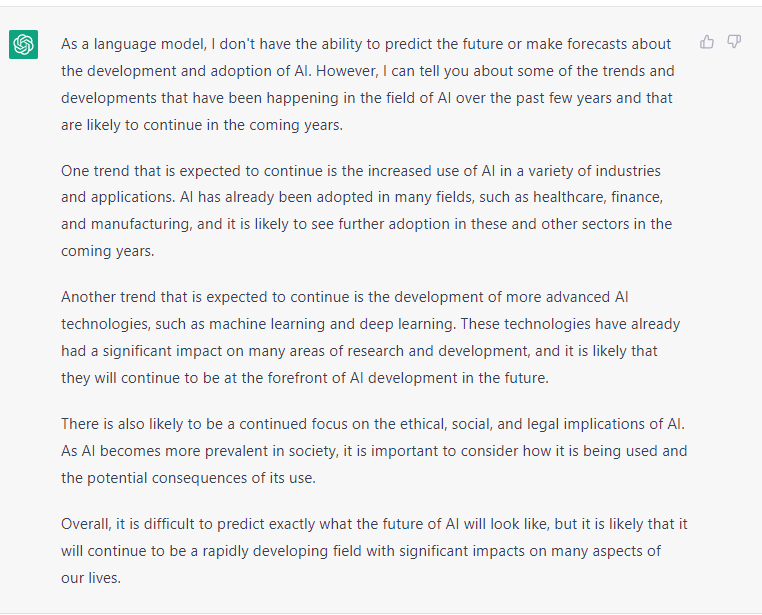 I found this to be someone basic and general. So I decided ok, let me ask the question differently, not like I would to my colleague, but more how I’d ask Google or Siri. So this is what I came up with.

Q: ChatGPT What advancements should we expect to see in AI in 2023? 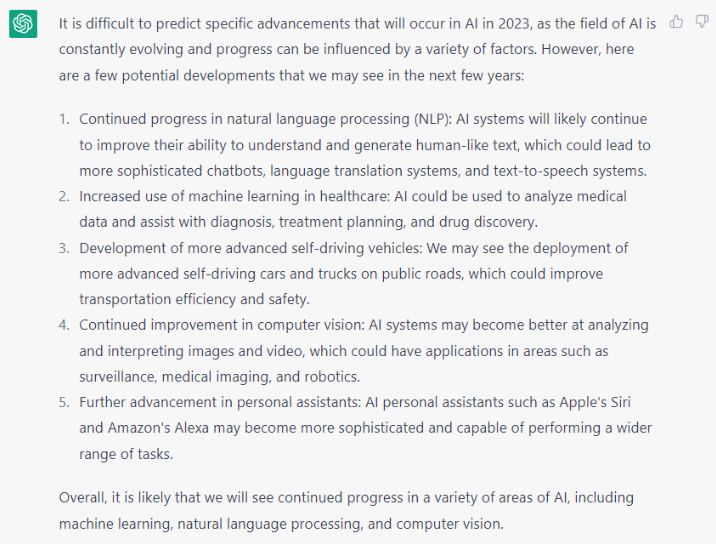 It’s interesting how with the slight adjustment in my question, I rendered a different answer. But what I found most telling about the ChatGTP answers is to me they just seem kind of flat, void of personality. Personally, I found our management team’s answers much more compelling, but definitely found a thrill and fascination receiving a response from ChatGTP. I definitely plan on finding a good use for ChatGTP, and am fascinated to see how others will use it too.

I do think what Eran Shlomo says holds much truth. This year will truly be a test for all companies and verticals as to how they will utilize AI in their companies, will they ride the wave or will they wash out? It’s certainly going to be an interesting year, and a wave worth following. I certainly look forward to riding this wave and seeing how such AI can prove successful, but only time will tell. We’ll have to check back in next year and reassess. And be sure to follow our blog as we will definitely be delving further into the whole ChatGTP wave.

As Open AI released their prototype Chat GPT on November 30th, 2022 the hype and increased fascination with this chatbot continued to grow. Not only 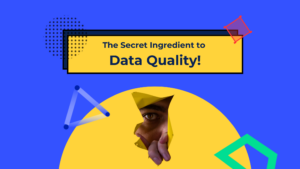 The Secret Ingredient to Data Quality